As part of Best Restaurant Week (yes, we totally made it up), we’re featuring stories from some of our restaurant partners. Check out our blog Nov 1–6 for new stories every day, and use code BESTWEEK for a $0 delivery fee on your order subtotaled $30+ all week.

Chef Kramer has perfected his craft across a wide range of kitchens — from a 5 year cooking stint in the Navy, to his last role as executive chef at Smith & Wollensky in the Rittenhouse Hotel. Asked about what advice he would give diners if he could, he said:

“I would tell people to just eat the food as the chef prepared it. I take it personally when people try to modify my sandwiches (unless it’s an allergy issue). I spent a lot of time making it the way it is, and there’s a reason for every ingredient.”

Much of his time was spent under the roofs of steakhouses, so moving to sandwiches was somewhat of a pivot of passion. And sixteen perfect sandwiches grace the Woodrow’s menu on Caviar, with mouthwatering names from the Coffee BBQ Brisket, to the simpler Woodrow’s Grilled Cheese, featuring pear as an ingredient.

Though Chef Kramer started his culinary career as a pre-teen, there was one point at which he left the restaurant business, only to return a short time later:

“There was one time in my life when I quit being a chef and did construction for a summer. I thought I was going to change careers and become a carpenter or something. I was completely miserable the whole summer and I just felt lost. Once the summer came to an end I got laid off from that job and headed right back into the kitchen. I guess that was the point when I realized this is what I am supposed to be doing with my life“.

As for the most unique flavor combo he’s tried in a sandwich?

“I was working on a sandwich that never made it to the menu that had chipotle-mint mayo on it. I ran it as a special for a day or two and most people were scared off by the mayo. I thought it was delicious! Maybe it will reappear someday!” 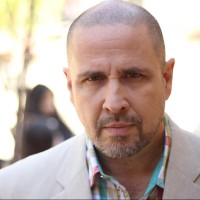 Steven Mark "Steve" Samblis is an American businessman, inventor, TV host, Interviewer, Movie Critic and Entrepreneur. He is the founder and CEO of Envision TV, Inc. and Cinema Buzz, Inc.