As much as this articles is a review of a restaurant, it is also a cautionary tale of the problem of having a epic reputation based on your flagship restaurant and then using that name to try and brand other styles of dinning…

As I walked into JG (save me from typing the name over and over). I had an expectation of incredible food,  drink and service.  What I got was good food, a couple of great drinks and service like a well oiled machine.  With the same personality as a machine.

I had the Ghost Sour to start the evening and it was interesting.  Following with the Tuna Tartare, wonderful bread and Grilled Foie Gras.  I then ordered The Japanese Old Fashion and it was very well done.

As dinner progressed,  that’s when the picture was forming of the well oiled machine.  Great service is not a utilitarian uncolorful basket of actions which set in a row create a lack of mistakes.

There was no personality in my servers. As they droned their way through movements and made no mistakes I saw no life in them.  Conversations where a minimum and only spun around what was on the table and what was on its way.

It was missing that magic essence that made the New York experience still maintain a fond spot in my remembrance.

I had the  CRUNCHY ORGANIC CHICKEN with Spinach & Hot Sauce for dinner with a side of creamed spinach and truffle mashed.  The entrees arrived and I noticed the chicken was served on a bed of spinach.  The waiter should have told me this and I would not have ordered the side.  He took the side away and took it off the bill.

And that was the dinner.  The experience as a whole was safe.

I have a very strong core belief.  We get one dinner a night.   If I wanted safe I would eat at home.  I want to be amazed every time I dine out.  I’m giving you my one dinner of the night.  I’m willing to pay, now amaze me.  Be brilliant with the cuisine.  Be imaginative with the environment from the walls to the tables to my silverware and be magical when it comes to the service.   Any chef that does not believe this is possible should find a new profession.

When I rate a restaurant I do it based on ambience,  service and food quality.   This one would throw me for a loop because food and drinks came without fault but safe.  On a 1-5 I’d give it a then a 4.  Ambience was again, safe.  A 4.

Now about that service.  There was nothing wrong with it but it was boring and impersonal.  If there was some fire behind those guys eyes it would have been a 5.   But it just melted like the T-2 and had no form or life to it.

In all I give Jean George Steakhouse at the Aria a 4.3.

I think they would be better off calling it “JG Steakhouse”.  I would have less expectations of greatness walking in.  If you want a safe place to dine,  maybe for a business meeting where there will be a lot of talk about CAD drawings and and ROI,  then this is a safe place to book a table.  It you want to be blown away,  this is a pass. 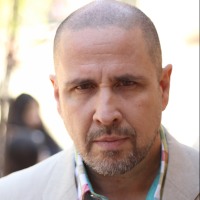